There are 26 nursing schools in Missouri with CCNE or ACEN accredited RN to BSN programs, mostly located sporadically across the state.

Missouri universities average enrollment is 4,150 students (smaller than the national average). There is a good range of large vs. small schools in Missouri. Missouri State University (19,000+ students), and Central Methodist University (12,000+ students) have higher enrollment numbers, while Saint Luke's College of Health Sciences and Research College of Nursing have under 1,000 reported enrollments.

There are a dozen different cities in Missouri with nursing schools offering CCNE or ACEN-accredited Bachelor's in Nursing degrees. Kansas City boasts the most accredited nursing schools in the state of Missouri, but most schools are relatively small in terms of enrollment.

Nursing is one of the leading sources of employment for individuals in the great state of Missouri. Being a reliable field for dedicated professionals, nursing provides well for its professionals.

In recent years, the various employers of nurses have found it necessary to change their requirements for employment for registered nurses.

Most nurses in the field possess and associate’s degree or certificate in nursing. Nowadays, especially with the BSN in 10 initiative put out by the American Nurses Association, employers prefer to hire nurses with a bachelor’s degree or higher, especially for higher tier positions.

The BSN for Current RNs

For existing nurses, this means that furthering their education is the only option to having a stable and providing career for the future.

In the state of Missouri, registered nurses will find that there are excellent RN to BSN programs available to choose from. These programs have grown rapidly in population over the last decade. People in the nursing field feel more secure with a higher degree in comparison to an associate’s degree.

What Will You Study?

The program involves a more in-depth look into the scientific field of nursing as well as other social concepts that will build on what nurses learned in lower degree programs. In comparison to the effort that goes into these programs, the payoff can be greater.

Those wanting a better life for themselves and their families, RN to BSN programs can be a solid answer to stay within healthcare, work as a nurse, but have more and different opportunities with your BSN.

Working in Healthcare in Missouri

Nurses working throughout the state work hard for the 5.9 million residents currently living in this state. Since nurses can work in a variety of different settings, the job market remains vast for professionals. 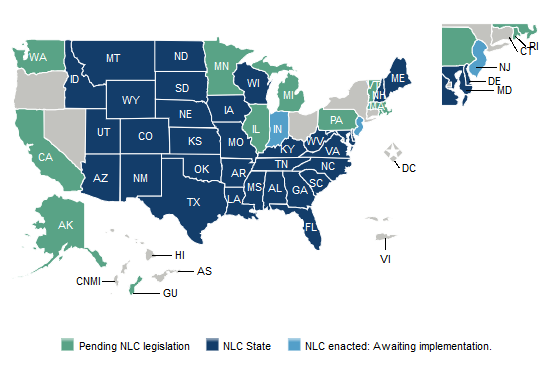 All Bachelor of Science in Nursing Programs

RN to BSN Programs by State